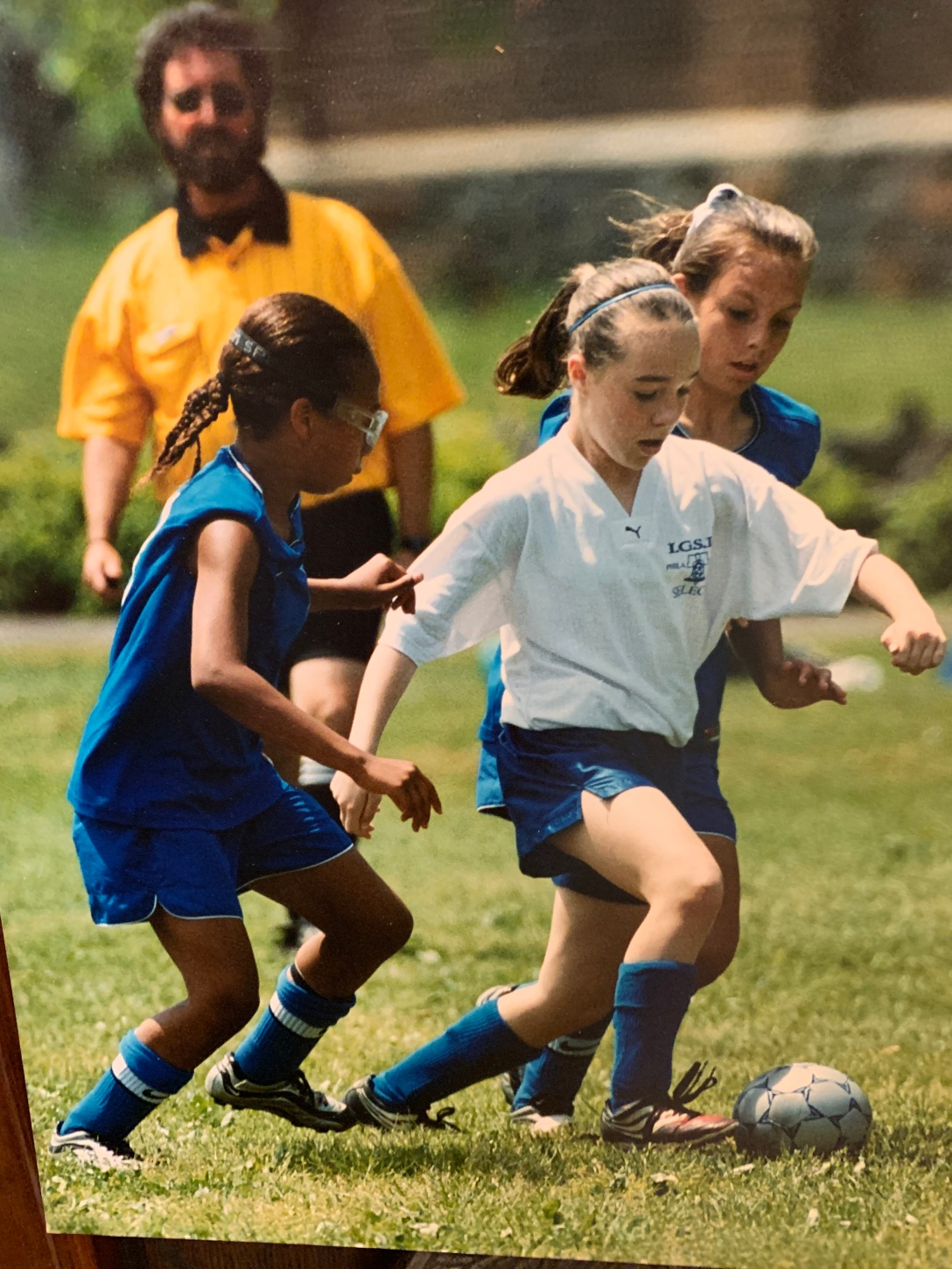 Though I focus my adult athletic life on individual sports, as a youth athlete, my life revolved around soccer. I remember the earliest days when I was 5 or 6, running around a muddy field, falling down flat on my back every time I touched the ball. I was in love.

Life pretty much revolved and soccer and school after that. By 9 or 10 I’d be playing for at least three teams at any given time – our Catholic school team, our club team, and a select team. When you’re young, that means traveling around the city, sometimes going out to the fancy suburbs and playing the rich kids (taking a perverse amount of joy in beating them while simultaneously being amazed at how nice their fields and schools were). By the high school years, we were playing anywhere from Connecticut to Florida, sometimes just a single Saturday game. You spend a lot of time with your team and coaches this way.

My soccer career ended for a variety of reasons in my junior year of high school, and now at 30, I miss it terribly. I love the game, but I also loved being part of a team. There are certain things you only learn within that dynamic – you win together, you lose together, you grow together, or you fail together. As a society, we put a lot of verbal stock in being a “team player,” or “taking one for the team,” but what does that really even mean outside of platitudes in a job interview? Here are a few things I picked up:

“What do I always tells you? When you assume…”

Paul Matuszak was my main youth soccer coach from age 8 to 14. Outside my parents, he had the greatest impact on my growth as a human being, and I credit a lot of my competitive nature, game-planning ability, and early maturity to him. He gave me the responsibility of leadership and largely let me figure things out the way I needed to. He would step in when necessary, and it was usually for one problem: I’d assume that my teammates were on the same page as me, and with that assumption, I’d try to make a play and then get upset when my teammate wasn’t where I thought they should be.

“Lindsey, remember, when you assume, you make an ASS out of U and ME” he’d tell me, and I’d laugh, because I was 10 and this adult said ASS to me.

But I got it. As I got older, I got a lot more vocal on the field. If I saw something coming together, I’d just yell at our forward to start running, and they usually would.

Communication. It continues to be vital in every part of life. If you don’t tell people what you want, you can’t be surprised when they don’t deliver. Relevant at work, with your spouse, with your kids, with the stranger on the bus taking up an extra seat with their stupid backpack. You have to speak it if you want to see it happen.

A group of great individuals doesn’t equal a great team

Once kids start getting a little more serious about the game, “select” teams began recruiting. These teams essentially let a coach choose the best player(s) from every team in a league and pit them against the best players from neighboring areas. This introduced them to greater competition before hitting the high school level. It feels really great when you’re an 11 year old that gets chosen for an “elite” group, and it does do a good job of teaching young people some of the realities of the cutthroat nature of vying for college spots (and mostly, the elusive scholarship). It also showed me at an early age that a bunch of great players certainly do not make a great team.

It’s pretty easy to pick out the standouts on any youth soccer team. Unfortunately, a lot of those kids know that they have a natural talent, and come to rely on doing everything themselves. There’s always one girl who refuses to get rid of the ball, no matter how many defenders are on her, no matter how many of her teammates are being left wide open, because in her mind, she’s the star forward and can handle it on her own.

The hardest part is that when you’re a kid, you usually feel that way because the adults in your life back up your ego! All kids are narcissists (I mean that in the least judgmental way possible, it’s just a stage of development), and without guidance from an adult with a strong team-oriented coaching style, the “star” kid is going to have a particularly hard time learning to let other people have their moment.

So to circle back to the select team: imagine the consequences of 11 players on the field, all of whom think they’re the greatest thing to happen to soccer in Pennsylvania this year? Nothing great. Those games were frustrating for everyone involved.

And now, imagine the consequences for someone who never grew out of that mindset. I’ll be the first to say that I STILL struggle with this in certain aspects of my life. As a kid, I’d take losses so personally, as if every mistake in the game reflected on me. As an adult, I struggle to delegate tasks that I’ve outgrown to coworkers or employees, mostly out of a fear that I won’t do a good enough job training them. Yes, on the surface this doesn’t seem like a typical narcissistic trait, but underneath that need to take full responsibility for other people’s actions puts ME at the center of the universe, always. Now, whenever I have a task that ought to be done by someone else, I remember the struggles of playing on a team of superstars who refused to pass the ball, and I make myself do it anyway.

Trust your teammates (or suffer the consequences)

Finally, there’s trust. Without it, the team doesn’t function. If I yelled for the ball because I was open and had a great shot, I needed my teammate to trust that I was capable to do my job on the field. Without that trust, we’d go nowhere.

The offshoot of this is when there’s a teammate who is NOT trusted – who comes to practice but doesn’t put in the work, who half-asses it at games, who clearly isn’t interested – the coach needs to make the hard decision to remove that person for the sake of the group. Even if that person had a ton of promise, an unwillingness to work with the rest of the team will seep into the culture of that team and create unease and unrest.

Once teams started getting more competitive, it became clear that coaches were looking for players that were both talented and a good mesh with the entire team. A cohesive team has so many more playing options and tends to deal with wins and losses in a more constructive way – learning from both successes and mistakes and growing together to move the whole group forward. As the team gets better, the individual players have more prospects – the best teams go to the best showcases (tournaments with college scouts), so ALL the players on those teams have a chance to be discovered. It then benefits the standout stars to work well with their teammates, both to increase the team’s standing overall and to show a new set of coaches that they have the talent and the ability to work well with others.

In adult life, we all have to make some hard decisions about the people we keep on our “team” – whether that’s a work team, our friend circle, or even family. If someone is constantly bringing down the culture of your group, at some point the only option is to cut them out. I know this is easier said than done, and sometimes we ARE stuck with a crappy teammate. In light of that, when you DO have the ability to remove someone from your life that you can’t trust or rely on, take advantage of it. When you can’t remove that person, keep your distance and build up the rest of your team (they’ll probably see themselves out at some point).

So, are you really a team player? Do you speak up for yourself and to help guide those around you? Do you know how to pass the ball? Do you trust your teammates? Hopefully my years on the field give you a little guidance in that direction.

One final anecdote about trust

While soccer was my life, I did try other things, including an embarrassing couple of years as a grade school cheerleader. What can I say, we all want to be popular, and throwing people in the air is pretty awesome.

Our little squad wasn’t great by ANY means, but generally worked pretty well together. You definitely need a lot of trust on the soccer field, but with stunts in cheerleading, you’re taking it to a new level – those girls flying in the air needed to KNOW that the other girls underneath them would safely catch them. We had no problems, except once in the 7th grade.

We were in competition, and my little group of 4 was getting ready for a basket toss, where three of us threw a tiny girl up in the air as high as we could, she’d do some kind of V, then we’d catch her. I could tell she was nervous, but who wouldn’t be honestly? We got set up, her feet were in perfect position for us to get some good air, and then her trust went right out the window. She kicked out into a V before we finished the toss, and she kicked me right in the face. It was my first black eye. I’m proud to say that after getting over being stunned, we all finished up our routine anyway.

powerlifter, runner, coach leading by example (learn from my mistakes!) View all posts by Lindsey